March 31, 2019
This is a fan theory about the meaning behind the Jordan Peele film Us.
There are spoilers ahead, so immediately close this tab. Otherwise, join me for a quick breakdown of 11:11.

So the film begins with a title card saying something along the lines of
"there are thousands of miles of unused tunnels in America, many which have no known purpose"
Keep this in mind as this will be helpful later.

Throughout the film there's a lot of imagery of 11 from the amount of rabbit cages in a row to the dots on the beach towel. 11:11 is everywhere and it all starts with a man holding a sign saying "Jeremiah 11:11", the bible verse is quite morbid of an omen "Behold, I will bring evil upon them, which they shall not be able to escape; and though they shall cry unto me, I will not hearken unto them.", but not as scary as what I'm about to tell you.

A few years ago, my Dad and later I started seeing the numbers 11:11 everywhere. It wasn't just the alarm clock either, our eyes almost naturally were drawn to it wherever we went. We didn't know why, nor think much of it... at least until one day when my dad, a broadband technician for the phone company, was working on a psychic's house. The psychic told my dad of the significance of the numbers, that his spririt guides were trying to tell him something. Skip ahead a few years and I'm in the theaters with my college friends watching this movie and I start to see these numbers again. On the car ride home, a bunch of coincidences start happening from the same song the protagonist in the film dances to playing on the radio to seing other repeating number combinations on the sides of the buildings we were passing.

I was spooked so I googled the number and found dozens of videos on it saying roughly the same thing. 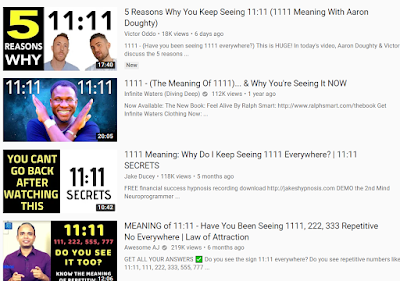 That 11:11 was a signifier that you're on the path to remembering oneself and going through a gate to finding meaning. My mind went straight back to the freeze frame fadeout on the quote on the tunnels "having no meaning" from the beginning of the film. Not only that, but these videos made the connection to alice in wonderland and the matrix, of "following the white rabbit" which of course was also a recurring visual motif of the film, and that saying has to do with uncovering conspiracy and looking beneath the surface which is very appropriate to the film.

So as you could imagine, I was a little freaked out. I'm not a spiritual person nor a conspiracy theorist, but last night was weird and the movie gave me goosebumps, but not because of the intended horror, but because of a few repeating numbers that perhaps had already had some personal significance.

Now of course there are other ways to read this film from class commentary, to a commentary on the US, and so forth... but I have a weird feeling like this movie had something else to say that was bigger than all of that, but then again, I could be projecting meaning onto this and perhaps it wasn't that deep. But if this was intentional, I'd like to know why. Why 11:11?